1st off...Kudos to Ben Jones of Tableau for his work and his willingness to share his own knowledge on how to build process control charts using Tableau Desktop. This is something my 6 sigma leaders wanted badly and it's not an out-of-the-box option with Tableau...yet.

Here's the links to a few of the blogs Ben has written on the topic: 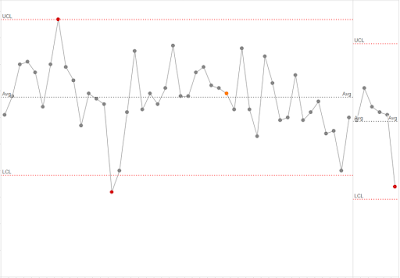 Notice that there is an outlier on the right portion of this viz that falls within the LCL. This raised a red flag (or dot...haha). After a bunch of comparing some rather lengthy calculations, we came to the conclusion that the table calculations needed to be "computed using Pane Across" rather than the default "Window Across:" 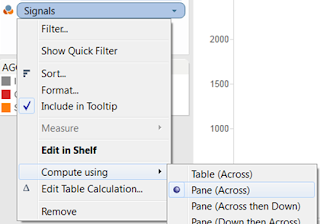 This step will ensure that your LCL, UCL & Signals calculations will reset at each pane as shown below for this example...no more red alert: 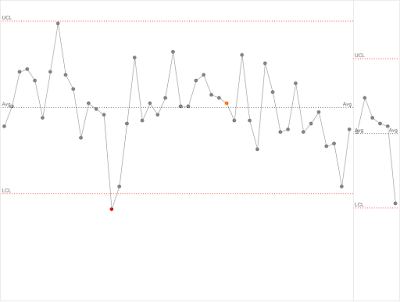 In all honesty, I never could get Ben's dashboard to break. As I look closer, Ben was most likely able to accomplish the same by using "Compute at Date". Not sure which will work for you, but I wanted to be put this out there in case you run into something similar.

Kevin A. Taylor
Raleigh, NC, United States
I consider myself to be extremely blessed. Aside from my family life which always comes first, I am extremely passionate about using visualization to better understand our world. While I feel I have a lot to offer back to the community, I am definitely still a student of the game. As for my background (aka credentials): I have worked in BI Reporting & Analytics for 15+ years including a couple major Tech companies. I have administered, trained and developed with most of the big Enterprise BI Platforms but currently leverage Tableau to explore and showcase insight. I chair the advisory board for WTCC Business Analytics Program and speak at events as often as possible (TUG, TAAG, TDWI, etc.)